One of the Seven Natural Wonders of the World, the Northern Lights are a stunning display of swirling, other-worldly lights. It’s no surprise seeing this spectacle features high on many travellers’ wish-lists: the incredible hues of blues and greens dancing across the night sky certainly make for a memorable holiday. Most people head for Finnish or Swedish Lapland, steering clear of large towns or cities (the more light pollution there is, the harder it is to see them). Essentially, the closer you are to the magnetic north pole, the more chance you have of the lights appearing.

Transun, along with our local experts, have selected destinations in the region’s far north with little or no light pollution to ensure your chances of spotting the Aurora Borealis are high. Sightings are never guaranteed, however, you can time your trip to coincide with monthly cycles and clear weather periods. We have years of experience arranging holidays to see the Northern Lights and use our expert knowledge to book a tour to suit you.

A natural phenomenon that has left us mere mortals stunned for centuries, the Northern Lights are a wonder both to look at and understand. Here’s the science behind them.

The colours swaying across the sky are caused by solar particles colliding with gases in the Earth’s atmosphere. The sun’s flares generate these particles. The result is a mish-mash of red, green, yellow and purple shades dancing in the night. Pale green and pink are the most commonly seen. Different types of gas particles colliding cause the range of colours.

For example, the pale green colours are caused by oxygen molecules around 60 miles above the Earth’s surface. All-red auroras, however, are a result of high-altitude oxygen floating up to 200 miles high.

Activity peaks every 11 years (often referred to as the solar maximum), with the next peak forecast for 2024. However, they are visible annually above the Arctic Circle from November through to March.

An ideal location to see the Northern Lights

Seeing the Northern Lights from the magnificent Arctic landscape of Karesuando only ampifies their beauty. this village is just home to 300 people and is found in Lapland, straddling the border between Finland and Sweden. The frozen river that cuts the village serves as the border between the two countries, and the settlement is surrounded by a rolling landscape of frozen lakes and plains that provide excellent sites from which to view the Northern Lights. 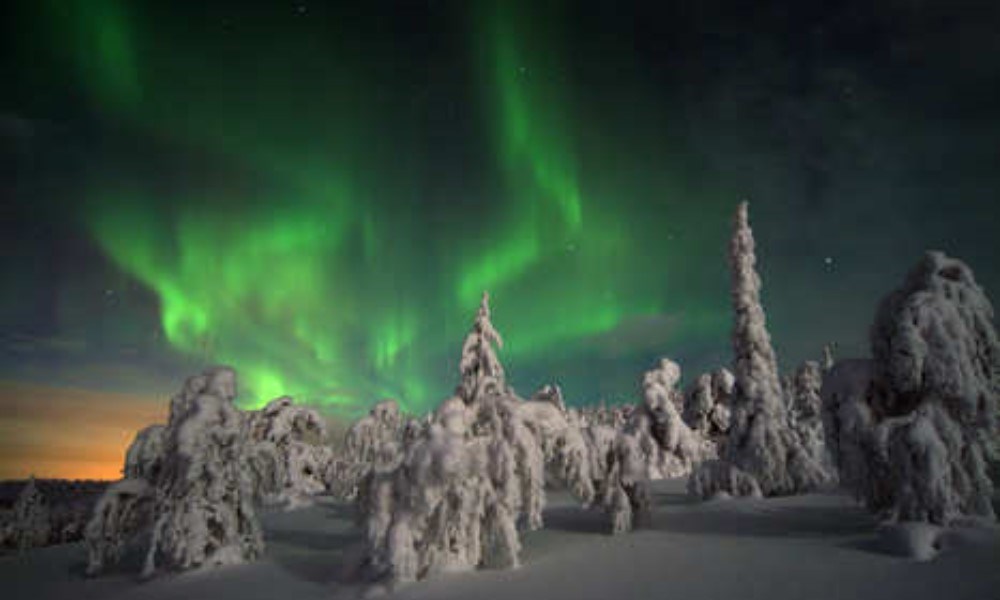 This experience can be enjoyed as part of these tours

Meet the REAL Father Christmas on this festive family stay in Jeris cabins – True Lapland at its...

Enjoy a white Christmas like you've never seen before!