What Are Northern Lights?

Myths, Legends and Facts About the Fabled Aurora

They're magical, awe-inspiring, breathtaking and very, very weird. But what, exactly, are the Northern Lights, how do they happen, what are they made of, when are they at their best, and why would you want to see them in the first place? Here's what you need to know, including the very latest science revealing why the aurora makes such an eerie, spooky sound.

The science bit - What are Northern Lights?

The Aurora is a dramatic light show caused by electrically charged particles released from the sun that enter the earth’s atmosphere and collide with gases like oxygen and nitrogen. You'll see them around the planet's far north and far south, Aurora Borealis in the northern hemisphere and Aurora Australis in the southern hemisphere, each hovering around its own magnetic pole.

Just like the Northern Lights, the southern version is a massive curtain of light, sometimes a diffuse glow, sometimes dramatic arcs and ribbons of colour, usually green but sometimes red and sometimes blue or purple. It's fascinating to know that scientists have found that, a lot of the time, the northern and southern auroras are actually mirror-images of each other. What you see in the far north, you also see in the far south.

Auroras come about thanks to collisions between charged gas particles in our planet's atmosphere. The particles originate with the sun, blown here by fierce solar winds whenever a gap in the sun's atmosphere – for example a sunspot - lets the electrons and protons flow out. These charged particles are mostly deflected by earth's magnetic field but it is weaker at the poles, so some particles get through to create the auroras we know and love.

More northern lights facts: different types of gas particle affect the colour of the aurora. Green, the most common shade, comes from oxygen molecules around 60 miles up, red comes from even higher-altitude oxygen as far as 200 miles up, and nitrogen gas creates rich blues and purples.

Did you know the Northern Lights make a strange noise? It has always been a mystery until now, and the answer has only just been published in New Scientist magazine. It's all down to one man's obsession, his thirty year love story with the aurora.

One very quiet night in 1990 Unto Laine and his friends were amazed to hear a faint faint background hissing, an odd swish, a tiny rustle that seemed to move in line with the aurora. Luckily Laine studied psychoacoustics, and after a 20 year search he has finally found the origins of the aurora's strange song.

Most aurora watchers never hear a thing. There's too much background noise, things like cameras clicking, conversations, the wind, maybe even reindeer breathing. But once he started to look Laine discovered a long history of mysterious auroral sounds, mostly from indigenous people, and the reports went back 300 years. Some people heard it as a whistling, some have even heard loud cracks like bullets from a gun.

In 2000, Laine started recording the aurora's sounds for the first time, a complex task involving first pinning down and rejecting every single potential source of ambient sound, something that took a decade. In 2010 he made the first ever recording of the aurora.

Laine believes the sounds come from corona discharge, which is rather like the spark you see and hear when you get a static shock. On very still nights a lot of positive and negative charge is built up. The freezing cold ground cools the air immediately above it and forces a layer of warmer air higher, trapping the cold air underneath. When negative ions close to ground level move up to the lower layer, they get stuck and the positive ions on the upper surface increase the electric potential so much that you get a fast and violent corona discharge... which in turn creates ultraviolet radiation, magnetic field pulses, and of course sound.

The best place and time to watch the aurora

Now you know what causes the Northern Lights. You know the science bit, their origin, and the magical song they sing. So why bother going to watch them? They're totally mind-blowing, a remarkable, freaky sight that you will never forget. And that's why they appear on so many people's bucket lists!

The lights get better the closer you get to the poles. There's no way you'll get to the south pole, so the north pole it is. Being as close to the north pole as possible gives you the best chance of the most dramatic display. On the other hand if there's a particularly big solar storm you might get to see the Aurora Australis from anywhere south of Australia.

In Europe the Lapland areas of Norway, Sweden and Finland are your best bet. Light pollution ruins the show, it's actually quite delicate, but a short 30 minute drive away from civilisation is usually enough for light pollution-free views. And winter is best of all thanks to the long, dark, clear nights, ideally between 10pm and midnight.

Walk this way for some of the very best aurora watching holidays. And prepare to have your mind properly blown! 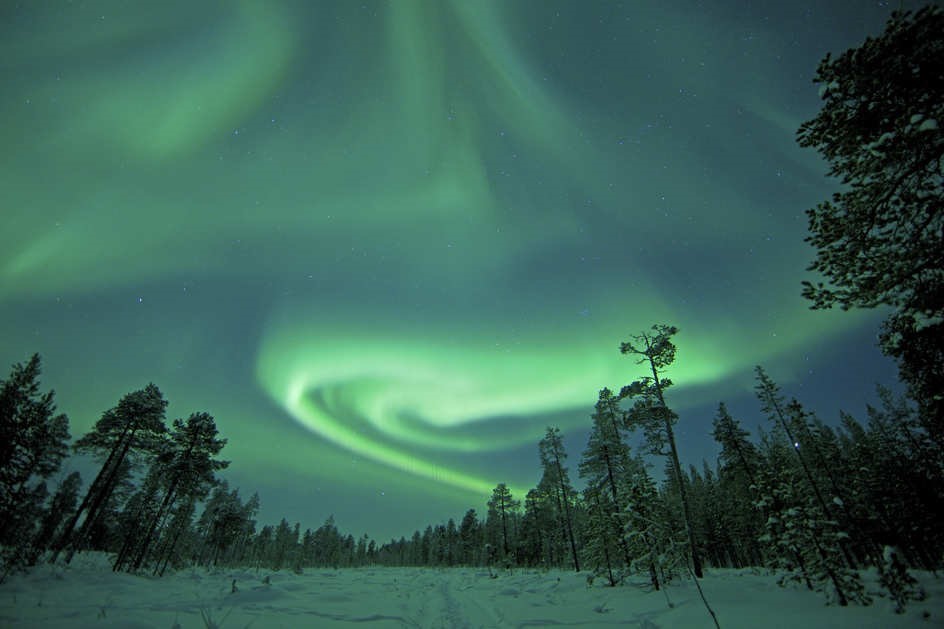