Watching the Northern Lights From an Igloo

See the Fabled Aurora from Lapland's Coolest Place to Stay

Are you planning to experience the magic of the Northern Lights for yourself? If so are you going to make it the experience of a lifetime and actually stay in an igloo, the real thing made from compacted show? Read on to find out more about the Northern Lights igloo experience, an awe-inspiringly unusual treat that you'll treasure for the rest of your life.

You're lovely and warm inside your private igloo. And now that darkness has fallen, you're excited about experiencing the beauty and wonder of the Aurora, the Northern Lights. You make your way down the icy tunnel to the door, and the night sky opens up above you, absolutely clear and studded with billions of stars, each one a sun like our own, surrounded by planets ad moons like ours. You wait for a moment and there they are, the magical lights, shimmering like the finest silk, falling in vast opalescent curtains through the sky. You feel awe. You can't help yourself, it's so big and so strange, so very extraordinary. And there you go. Just like that, your life has changed.

Known as Aurora borealis in the northern hemisphere and Aurora australis in the south, the vividly colourful dancing lights that sometimes light up the sky are caused by collisions between electrically charged particles from the sun as they enter our planet's atmosphere. The resulting display is literally awe-inspiring, like nothing else on earth.

Why it's good to have your awe inspired!

Have you ever felt actual, genuine awe? It's an incredibly powerful emotion. According to scientists (https://www.newscientist.com/article/mg23531360-400-awesome-awe-the-emotion-that-gives-us-superpowers/), awe is such a powerful feeling that it changes your sense of self, connects you with humanity, and boosts your mind and body. If you've ever been stopped in your tracks by a piece of music so lovely it gives you goose pimples, or knocked for six by the sheer vastness of the night sky, you will understand how it feels to be awestruck. In fact awe can also lower stress, boost creativity, and even make us nicer people.

According to the respected psychologist and awe researcher Dacher Keltner, who works at the University of California, Berkeley, “people who watched a nature video that elicited awe – rather than other positive emotions such as happiness or pride – were subsequently more ethical, more generous and described themselves as feeling more connected to people in general. Gazing up at tall eucalyptus trees left others more likely to help someone who stumbled in front of them. And after standing in front of a Tyrannosaurus rex skeleton, people were more likely to describe themselves as part of a group.”

Where is the best place to see the Northern Lights?

Where is the best place to see the Northern Lights? In our experience your best bet is to head north of the Arctic Circle, and lovely Lapland is a superb choice. Lapland is in the far north of Finland, a vast and mostly empty landscape bordering Sweden, Norway, Russia and the Baltic. The midnight sun, superb skiing, huge sub-arctic wildernesses and amazing ski resorts await you, plus the Sami people and their reindeer, the vibrant capital Rovaniemi, and of course the aurora itself.

Once you've reached Lapland, what's the very best place to stay to see the aurora in all its strange glory? An igloo, of course. You need a propernorthern lights igloo, and fortunately there are plenty of igloos available, especially built by experts for holidaymakers like you to enjoy.

As a child, did you ever build an igloo in the garden? If you did, you'll know how strangely cosy they are. Considering snow is semi-frozen water, snow shelters can be remarkably warm. No wonder lost travellers over millennia have survived snowstorms by digging themselves into snow holes.

Igloos are made from compressed snow sawn into blocks and piled up to make walls around a hole in the snow. Compressed snow is a much better insulator than actual ice, and insulates the building really well from cold air.

The entrance of an igloo is at the bottom, and includes at least one ninety degree angle to keep the wind from howling its way inside. There's usually a small hole in the top of the roof for ventilation. The temperature inside an igloo is pleasant even when it's as cold as minus fifty outside. Because the sleeping and sitting area is raised above the floor, which is a cold sink, they stay at a higher temperature.

The igloos our customers stay in are completely rebuilt every year. They're the same kind of igloos as the Inuit people use, an authentic experience that's so much more real than an ice hotel or a glass-roofed modern igloo-style building. The internal temperature hovers around a cool 0°C no matter what the temperature is outside. And when you're wrapped in the specialist super-warm thermals and sleeping bags we provide, on top of a thick layer of soft reindeer skins, you'll stay supremely warm and all night long.

The history of the igloo

Although the origin of the igloo is long lost in time, Inuit peoples have made igloos for hundreds if not thousands of years. So have the indigenous people of Canada's Central Arctic region and Greenland's Thule region. Oddly, though, the Sami people of Lapland traditionally lived in earth houses, not igloos.

Small igloos were used by the Inuit as temporary shelters for hunting trips, useful for just a night or two. A medium sized igloo formed a semi-permanent family home, a place with one room housing one or two families. The biggest igloos of all were often built in twos, one for living and the other for partying and special occasions. Large enough to comfortably house as many as 20 people, these monsters were sometimes made from several smaller igloos connected by tunnels.

Some modern Inuit people still use igloos as temporary shelters while hunting. But climate change means there's less snow every year, and that is making igloo construction more of a challenge as time passes. That's another good reason, one of many great reasons, to experience igloo living for yourself, while you still can! 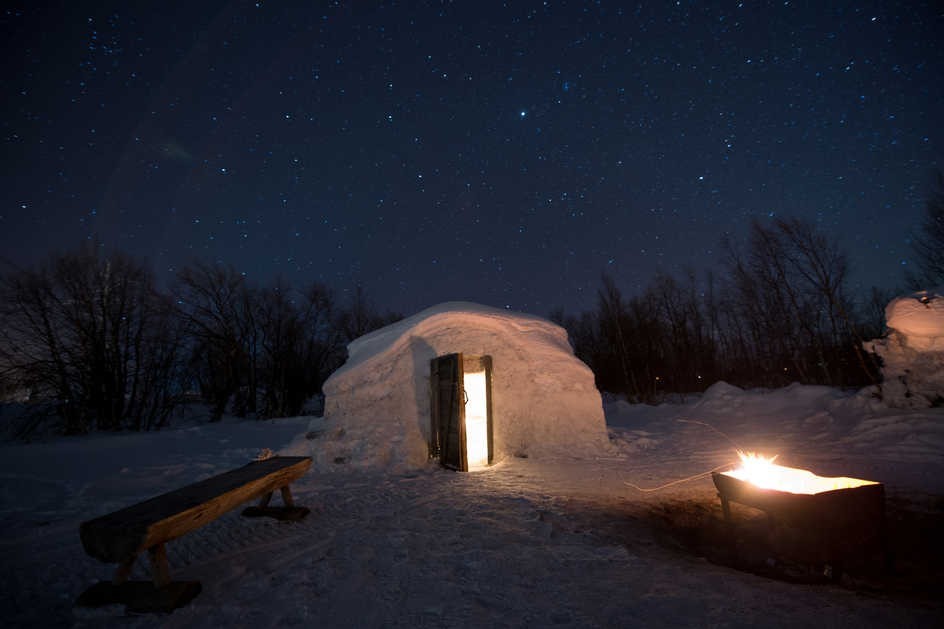 Experience igloo living for yourself

Sleeping in your very own private Northern Lights igloo is the experience of a lifetime, as well as the ultimate in romance. You can choose to do exactly that as an Optional Excursion on plenty of the holidays we offer inside the Arctic Circle, including our popular Arctic Spirit breaks.