You're planning a visit to see the Northern Lights. It's a fantastic, magical experience you'll remember for life. But there's more to Lapland than snow and the aurora. You'll see reindeer too, remarkable creatures that have adapted perfectly to the unique conditions they live in. They're beautiful animals, loved by the local Sami people and adored by visitors. Here's what you need to know about a creature whose middle name might as well be 'Christmas'! 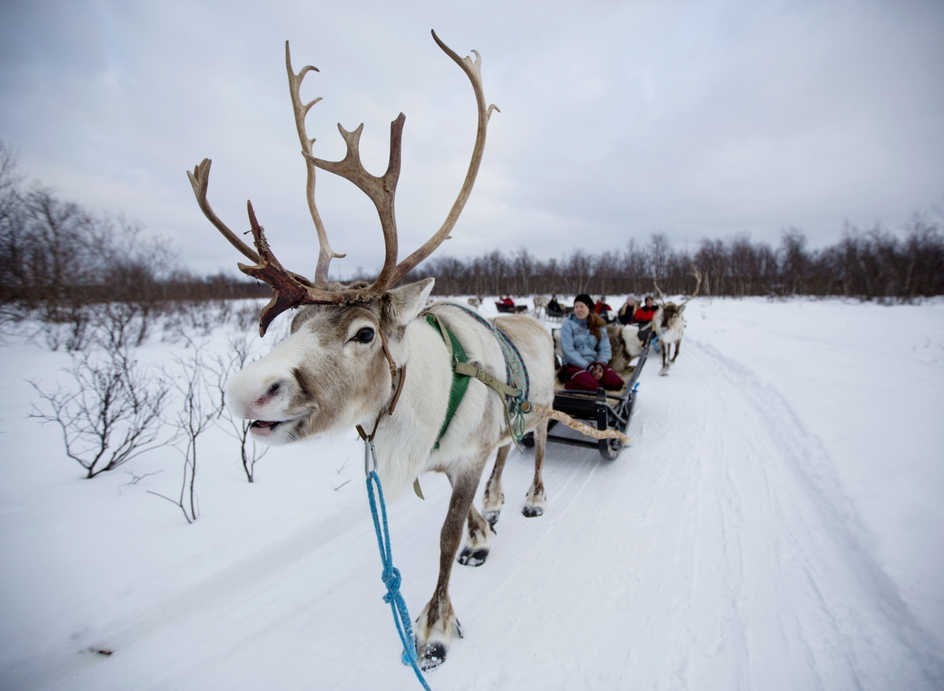 The life of the reindeer – Fascinating facts

• Reindeer everywhere, including the reindeer in Lapland itself, belong to the deer family, Latin name Cervidae, a family that also includes elk and moose. Reindeer eyes change colour, the only mammals known to do so. Their eyes actually change with the Arctic seasons, either going gold or blue depending on the levels of light. It seems to help them spot predators in their strange environment, a place of extreme light and dark, sometimes totally light or completely dark for 24 hours a day.

• Male and female reindeer both grow antlers. And the red nose legend has its roots in a strange natural phenomenon. Reindeer noses are actually designed to warm the air before it flows into their lungs. They do it thanks to a dense web of blood vessels, around 25% more capillaries than the human nose. When it gets really cold, the flow of oxygenated blood keeps the nose nice and warm. Scientists also believe these extra blood vessels help regulate the animal's internal body temperature, essential because they don't sweat.

• Reindeer hooves are unusual, too. They grow in summer, when the ground is soft and they risk sinking in, and they shrink again in winter because it's easier to stay upright on top of the harder ground. And as a rule, the farther north you go, the paler the reindeer's coat gets, and that's why white reindeer Lapland experiences are so popular – they're such incredibly attractive creatures.

• The Sami in Lapland are not the only tribe to herd and keep reindeer. It's a popular thing amongst Arctic peoples, who have lived amongst the creatures for centuries if not thousands of years. This is illustrated by the animal's name, which comes from the ancient Norse word hreinn. Because it simply means 'deer', the word 'reindeer' actually means 'deer deer'.

• Reindeer are great travellers. They have a range of just under 200 square miles and are highly social herd animals, resting, feeding and travelling in large groups of as many as several hundred. But the spring sees these smaller herds combine into massive crowds of 50,000 to 500,000 animals, which steadily make their way a thousand miles or so south searching for food.

• Being herbivores, the animals eat ferns, moss, grass, shoots, fungi and leaves, and to survive they have to consume anything from 9 to 18 pounds of vegetation every day. In winter they dig through the snow for food using their antlers, and they eat as much energy-rich lichens as they can. Thanks to an excellent sense of smell, they can scent food buried as deep as two metres under the snow.

• The gestation period for reindeer is roughly seven and a half months, and while they usually have one baby at a time, some have as many as four. The babies can stand more or less straight away, and they're on a diet of solid food plus mum's milk within a week. Six months later they're weaned, and they're ready to grow their first antlers at aged two. As a reindeer you're an adult by the age of four to six, and you'll live as long as 18 years.

The Sami people's reliance on reindeer

The Sami culture have lived in the northern arctic for at least 5000 years, and some ancient Sami settlements date back twelve thousand years. Thanks to them reindeer husbandry is common, stretching across the northernmost regions of Norway, Sweden, Finland, and Russia. The strong long-term relationship they've developed with the animals has created a culture that's intimately connected with herding.

Reindeer season kicks off in May each year, when the people count their animals to make sure they meet the official quota, a limit set to ensure there's enough food for them in the wild. The Sami mark their animals' ears, each owner having their own mark, something that's more practical way up north than the usual farming practice of tagging or microchipping. The reindeer you see if you go on a tour are all male, since the females are busy either being pregnant or looking after their young. In March, male or female, the creature sheds its antlers.

The Sami are Western Europe's only indigenous tribe. They've been herding reindeer on a large scale for at least 800 years. It has always been a tough existence, and it remains a truly challenging way of life. It's a year-long job, you have to look after literally thousands of animals, and it involves long days spent exclusively outside in freezing cold weather. These days the Sami supplement their income with tourism, including Christmas-led holidays in the winter and salmon fishing breaks in summer. But December is the busiest month of all, the time when thousands of us visit to enjoy a little magic, enjoying reindeer sledging, gold panning, ice fishing, the legendary Northern Lights and reindeer sleigh rides.

Sadly the ancient reindeer herding culture is dying. Young Sami are heading for the cities and an easier life, and while they're doing everything they can to keep the old traditions alive, it's difficult. Luckily the Sami are strong people, and they know how to change and adapt to survive. On the bright side organisations like the Hirvas Sami reindeer herding group are keeping the herding lifestyle and language alive, with initiatives like the Reindeer School, designed to help young Sami protect their language and continue their traditions.

How did the reindeer become an international Christmas icon?

Back to the present day, and reindeer sit at the heart of many a child's magical Lapland Christmas holiday. The story goes like this: Santa Claus' reindeer – namely Dasher, Dancer, Prancer, Vixen, Comet, Cupid, Donner and Blitzen - drag a sleigh through the night sky to help him deliver gifts to children on Christmas Eve. But how were these charming animals co-opted to enrich the Christian legend?

It's all down to a 1837 poem by Clement Moore, a poem called A Visit from St. Nicholas, or The Night Before Christmas. It talks about Santa and his little sleigh, which is driven by eight flying reindeer. Rudolph himself arrived more than a century later in 1939 thanks to Robert May, whose cute story penned for a give-away book for children quickly became hugely popular. As they say, the rest is history.

If you'd like to get to know reindeer, Lapand is a prime destination. And if you want to experience white reindeer, Lapland is your best choice. The farther north you go, the paler and more ethereal the animals' coats become, and that's total magic! 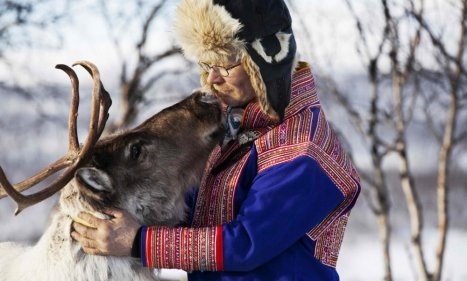